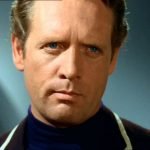 Patrick McGoohan was an actor and director best known for his roles in the 1960s British television series “Danger Man” and “The Prisoner.” He was born in New York City in 1928 and raised in Ireland and England. He began his acting career in the 1950s and quickly established himself as a talented and versatile performer.

McGoohan’s most notable role is as the star of the cult classic television series “The Prisoner,” which aired in 1967 and 1968. The show was a surreal and allegorical series about a man who is held captive in a mysterious village, and McGoohan played the lead role of Number Six. The show was a critical and commercial success, and it has since gained a cult following.

In addition to his acting career, McGoohan was also an avid car enthusiast and raced in his spare time. He was known for driving a Lotus Seven, which was a small and lightweight sports car that was very popular in the 1960s. The car was produced by the British car manufacturer Lotus and was known for its agility and handling. McGoohan was often seen driving the car around London, and it became associated with him.

McGoohan’s love for the car was so much that he even drove a Lotus Seven in the opening sequence of “The Prisoner.” The car also made a cameo appearance in an episode of the series, as Number Six’s personal vehicle. It was a great way to showcase his personal passion and integrate it in the show.

McGoohan passed away in 2009, but his legacy lives on through his work as an actor, director, and car enthusiast. He will always be remembered for his iconic role in “The Prisoner” and his association with the Lotus Seven sports car. His love for the car was a reflection of his personality, as he was a man who always pushed for speed, performance and freedom, which can be seen in his acting and directing career as well.